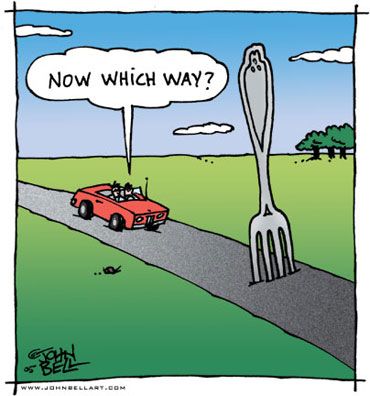 According to many popular interpretations, in a dream, a fork is associated with a fork in waking life – crossroads or indecision. That is why the dream book explains the majority of dreams with this cutlery by the complexity of the choice. Sharp tines symbolize misunderstanding, therefore, sometimes they are harbingers of minor conflicts and quarrels.

The dream interpretation gives interesting explanations of a dream about a fork in combination with other cutlery. In a dream, its companion is often a spoon, which itself is a measure of success. Such neighborhood suggests that you will have to fight for your goals.

If you dreamed about a fork and a spoon, in the near future you will have to make a difficult choice. Fortunately, the dreamer does not have to make a fateful decision, since it is only kitchen utensils that appeared in the dream.

In general, the dream book believes that a spoon and a fork are a completely favorable combination in a dream. Both items symbolize the dreamer's coming small victory. But the achievement may require a lot of effort.

If you dreamed about a fork and a knife, the dream interpreter warns of an increased likelihood of conflict situations, strongly recommends staying away from troublemakers, not provoking quarrels and not succumbing to other people's provocations. 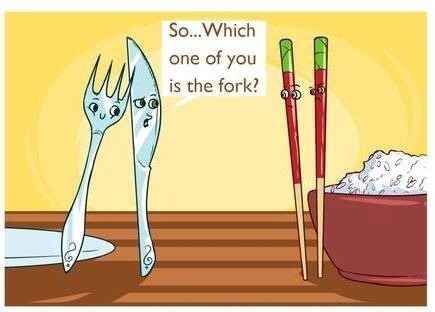 Any silver element of the table set represents well-being, exquisite taste and a beautiful life. The silver fork, which appeared in night dreams, is no exception.

The interpreter believes that the silver trident symbolizes treasured wealth and a life of anxiety. Friends and relatives can become enemies because of material wealth.

If a woman dreamed of a dirty fork, the interpreter warns that it is unlikely that it will be possible to avoid minor domestic troubles, both at home and outside its walls.

Dirty dishes in a dream personify a dishonest person. The dream speaks of a series of meetings with unpleasant, unprincipled, unscrupulous people.

If you dreamed about a broken fork, the dream book recommends being on the lookout. The symbol seen in a dream indicates that you have an enemy. He is devilishly cunning and used to acting on the sly.

Lovers should also know why a broken fork appears in a dream. In a romantic relationship, a crack is outlined, which can lead to a complete split and even separation in the future. The reason may be the betrayal of one of the partners or the baseless jealousy of the other.

Often a broken fork informs in advance about a bad deed that will soon be done by a person of whom you thought highly.

What does it mean if you dream that a fork fell? According to Miller's dream book, a fork that fell means that someone from the circle of your communication is going to annoy you. Since only a household item appeared in the dream, the ill-wisher will not cause serious harm.

Miller's dream book also believes that the dreamer who sees that he dropped a fork in a dream often turns out to be the main cause of his troubles.

The Culinary fortuneteller explains what the dream is about if the fork falls. The visit of unexpected guests will cause a real commotion.

This is not the only explanation for a dream when the kitchen utensils fell from your hands. Through his own absent-mindedness, the dreamer can lose a valuable thing in the house. The loss will soon be found, but the incident will cause a lot of anxiety and inconvenience.

Time will drain all tears and heal all wounds.