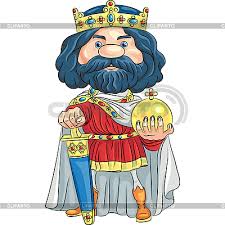 An image of a king in a dream is a reflection of pursuit for power, respect and authority. Some dreambooks connect an image of a king in a dream with a father of the dreamer. The dreamer is probably trying either to contradict or correspond the parent’s standards. According to Miller, a girl who sees a monarch in her dream will manage to get happily married to her beloved soon. The same dream promises full dependence on husband and on his mood for a married woman. If a man has a dream about a healthy king in good mood, this is a promise of getting promotion at work.

A king or emperor, seen in a dream, promises protection of the person in power. If you were talking to a reign with respect, the image promises the fulfillment of your dreams and plans and favorable life circumstances.

Being too familiar with the king in your dream indicates the fall of your plans and ruining your hopes. If you became a king (emperor) yourself, in real life you will have to help the person who will ask for your cooperation. The other interpretation of this night plot is the reflection of the dreamer’s leadership qualities that will help him get success in future.

If a dreamer sees a cards’ king, this dream predicts luck in risky ventures. The card suit and the quantity of kings don’t matter here. A girl, who sees two kings of hearts or two kings of diamonds, is warned about romantic troubles. Mostly probable, the girl will have to make an uneasy choice between two admirers in real life. A king of spades is a promise of a partner with high social position and power. The king of clubs predicts communication with governmental authorities. If the fortune-teller promised you a meeting with the king of spades, beware of thoughtless actions; a promise of a meeting with a king of hearts, you can trust your heart.

A dream about marrying a king promises pleasant acquaintance with a prominent and rich person. If a woman sees her partner as a king, this dream may symbolize the change in their relations; the man will become protective and this situation will completely satisfy the woman. Kissing a member of the royal family predicts deceit and receiving a doubtful proposal. The dream can also warn about relations with an insincere person who has mercantile goals. Getting married to a king or prince is a favorable sign promising sincere love and understanding with your partner.