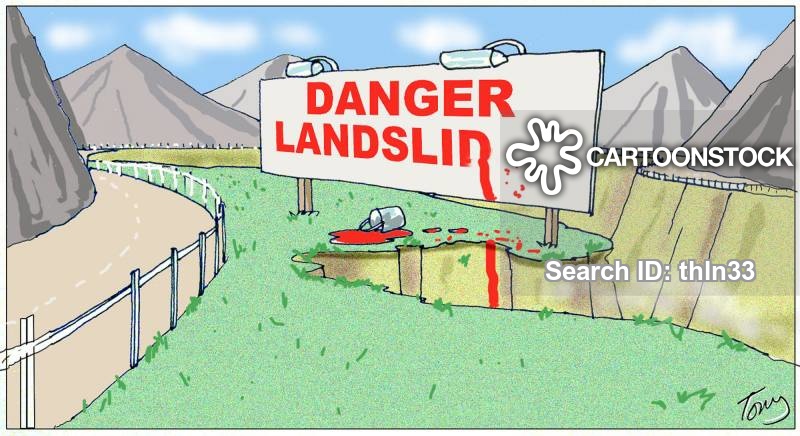 What is landslide dream meaning and symbolism? A landslide seen in a dream tells about large-scale troubles and personal problems. To know what to do in order to avoid problems, dream books recommend taking what you saw in a dream seriously.

Dream meaning of landslide is the following: you may take part in a risky endeavor or become a part of a risky situation. Besides that such a dream predicts receiving unexpected news.

If you dreamed that you were a victim of a landslide, this means you should prepare for the fact that a “black streak” will come in your life, the interpreter upsets, explaining what such nightmares mean. Moreover, it should be borne in mind that this trouble will happen in the most unexpected way, when nothing will portend trouble.

The Modern dream book, interpreting the plot in which you got under a landslide, recommends paying attention to your close surrounding and making sure that there is no traitor in it. According to this interpreter, such a vision may well indicate that someone of people you trust will “fill you up” with problems.

But the interpreter of dreams of the clairvoyant Vanga recommends keeping safe from diseases and accidents, if you dreamed that you were covered in muddy liquid with stones and dirt. It is particularly likely you can get sick or injured if you saw your own death under an avalanche of mud in a dream.

What is the meaning of a dream of the plot in which you are observing the landslide gathering from the side, the Modern Dream Book will explain: in reality, you will encounter "grumbling of the crowd." Simply put, there is likelihood that you will become a witness, or perhaps even an indirect participant, in the grandiose scandal of your colleagues with a boss or some other person. Did you have a dream that you see the consequences of a landslide that destroyed residential neighborhoods? Try to avoid quarrels with neighbors in the near future. And also do not enter into squabbles that they “organize” against someone else - you will regret that you intervened.

A dream in which you act as a rescuer, pulling people out from under the rubble arranged by a landslide, dream books identify with the opportunity to help someone in real life. However, Pastor David Loff advises: when helping others in a dream, do not forget about your interests and safety - do not sacrifice them.

Helping a small child in a dream to get out of the rubble means overcoming obstacles on the way to your goal, Miss Hasse's dream book pleases.

The interpretation of a dream about a landslide can be influenced by the reason that entailed its formation, say the dream books, explaining such a dream. Here are some of them:

What were you doing in a landslide dream?

What are the Top-5 negative landslide dream meanings?

Here are the Top-5 positive meanings of landslide in dreams:

The struggle is always justified if you know what you are striving for.