Interpretation of a dream about parachute 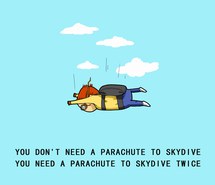 A dream about parachute means a perspective to take a risk and gain success. An absolutely black parachute is telling about the dreamer’s worries about coming events. You should think everything over properly before taking the final decision.

A parachute with holes in a dream tells the dreamer about the unreliable rear in the family or frail safety backup at work. In case some of your plans fail, you shouldn’t count on someone’s support.

If you see parachute equipment in a dream this means that the dreamer has doubts about reliability of some plan. If the equipment was torn or had some defects, you should not start your endeavor. If you happened to jump with a parachute and have a safe landing, this plot predicts a successful ending of a risky venture.

According to Miller’s dreambook, a jump and flight with a parachute, which ended with a safe landing on the ground, predicts incredible success in a dubious and seemingly hopeless enterprise.

Freud explains a jump with a parachute as a chance to have great emotions from an unexpected meeting. Besides that this plot predicts an acquaintance that will completely change the dreamer’s views on sex. If a married woman jumped from an airplane and flew with a parachute in a dream, this is a promise of an unexpected love adventure, which can ruin the relationship with her husband. 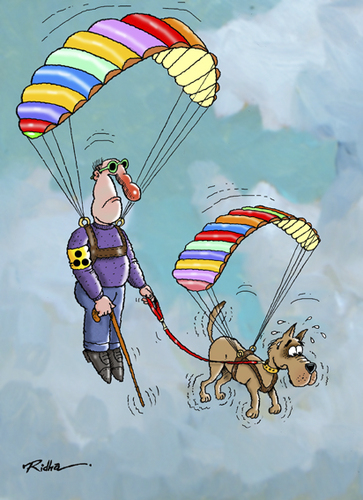 If you happened to have a free fall with a parachute that didn’t open up, the dreambook from A to Z warns about an accident that can result in heavy injure. If it finally opened up the last moment and the dreamer flew over the ground, this is a symbol that he will miraculously survive.

A flight with a parachute that didn’t open up also predicts failure in business.

If the flight was lasting too long and the dreamer was picking up speed, approaching a solid surface, the dreambooks think that he will gain success in the sphere that he has chosen only if he puts away all his fears and doubts.

Seeing a flight of several skydivers is telling about the feeling of envy that the dreamer has. Trying on parachute equipment is a symbol warning about danger. Flying on an airplane without parachute in a dream means the lack of ways of retreat and a backup plan in case of failure.

If there was an airplane crash and you flew with a parachute and landed on an unknown territory, this means getting into a hopeless situation, due to which you will have to agree to the conditions dictated by your opponents.

If you saw a dream about another person’s or several people’s flight with a parachute during some festive event means that you will take measures to protect your investments, Miller thinks.