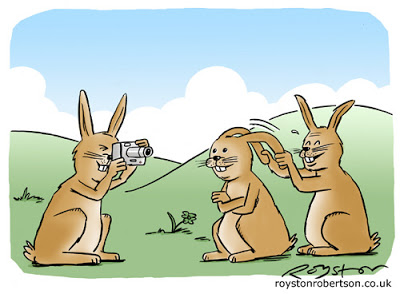 What does it mean when you dream about a rabbit? Nostradamus considers a nimble rabbit a positive dream symbol. The image usually predicts positive changes. Purposeful, ambitious people can see rabbits in a dream. They will have to take care of their own business, think about expanding their authority, find new sources of income. Stability, career growth and prosperity are waiting for them.

If you happened to buy, receive as a gift, hold in your hands or stroke a rabbit, you can expect profit even from small transactions. The dream means that you have an excellent chance to increase the well-being of your family, without any special effort.

Giving it to someone or selling a rabbit means losing a part of the business, giving in to an unknown person. The dreambooks advise not to be upset; luck will turn away from you not for a long time. After a short period of time, you will be able to lead a profitable project and return the glory of a successful entrepreneur.

Miller’s dreambook speaks about the color of a rabbit seen in a dream. To see a single-colored rabbit in a dream promises high rates at school and work. In addition, the psychologist promises a number of achievements in contests, sports and athletics competitions.

To see a sick or wounded rabbit in a dream is a sign of unforeseen troubles. Islamic dreambook, revealing what dreams of rescuing a rabbit from the water or healing it means, warns against an avalanche of problems. Obstacles in business will begin in the morning. You will have to deal with other people's issues till late evening.

Seeing several sick or wounded rabbits means losing control of the project. Failure is inevitable if you do not urgently reconsider your working methods and habits and do not change them to the opposite ones.

Fortunately, a rabbit that has died in a dream is not a sign of negativity. On the contrary, with its death, you will gain new opportunities, get rid of a number of obstacles, and meet people who will willingly help in advancing your goal.

To commit a ritual killing of a rabbit, according to Islamic dreambook is a sign of receipt of promising proposals. Your candidacy will be approved on a high post. Killing a pet rabbit in a dream is the same as overthrowing an objectionable boss and taking the vacant place himself.

The hare killed during the hunt is a precursor of cardinal changes in the dreamer's life. Catching up, aiming and shooting it in a dream means realization of the cherished dream.

To carve a rabbit body, cut its meat means the appearance of the first signs of the disease. If you happened to see rabbit meat in a dream, Vanga warns of the need to protect your health, both physical and mental.

If a rabbit in a dream died not from your hands, but from fear - beware of accidental connections, genital infections, and skin diseases. There is a risk of depression, blues, and anxiety.

To do something with the rabbit fur, sew a fur coat or a hat promises recovery of a loved one. Good news from afar will delight everyone who has seen a lot of rabbit furs.

A large and well-fed rabbit symbolizes a relationship of trust between spouses and partners. In addition, a big rabbit is considered a sign of fertility.

Small rabbits are a warning of vain efforts. The bustle, which will fall in the coming days, will not let you focus on the main things.

A lot of little white and gray rabbit babies in a dream are a sign of the appearance of problems at your close relatives: children, parents, brothers, sisters. Moreover, they all may need help simultaneously.

The toy rabbit, cat or hamster is considered a threat, a warning against cheaters, dishonest people. Running away from a revived toy is the same as getting into a trap set by detractors.

Felomena’s dreambook pays attention to the peculiarities of the toy animal:

The interpreters advise not to take serious steps in the near future, not to make deals, not to succumb to the temptations. Otherwise, it will be extremely difficult to save your reputation.

A rabbit in the cage indicates the dreamer's uncertainty in his actions. Indecision can be an obstacle to the advancement of your ideas.

There is a risk of deterioration in relations with your boss and colleagues. If a rabbit attacks you, bites, tries to reach with a paw from behind the cage, you should know that there are competitors, people who want to take your place. Bite serves as a warning about the first steps of the enemy.

According to Freud, to breed rare breeds of rabbits in a dream predicts love adventures. Decorative specimens testify to the dreary tastes of the dreamer, inconsistency in sex.

Freud's dream interpretation promises the beginning of a romantic relationship to anyone who was present at feeding newborn babies. Grating the carrots to the baby rabbits, feeding them, playing with them, putting them to sleep is a promise of sensual pleasures.

Two adult rabbits surrounded by offspring are a sign of mutual love and trusting relationships between spouses and sexual partners.